Having completed plurality, here comes its friend Runoff, where we are told to write 6 functions that mimic voting in a more advanced way.

it wasn’t easy for me at first, I had to take a little break before I resumed back to the pset when I eventually complete it.

if you are being told that programming is easy, then it’s a big lie. you need to think out of the box.

enough of the story and let me go into the real stuff.

we need to execute the wget command to download the distribution code, which contain various functions that are emptied for us to complete.

We are to update the vote function such that it keeps track of all the preference, if at any point, the ballot is deemed to be invalid, the program should exist.

This function prints the winner if there’s one. The logic here is that the winner must have more than half the votes.

This function returns the minimum number of votes of anyone still in the election, which we can then use to figure out who we will need to be eliminated.

The main purpose of is_tie function is to decide whether or not the election is a tie between all of the remaining candidate, if there is, it should return true and return false if not.

That’s all, I hope you are able to walk through all functions step by step as discussed in this post. Don’t forget to always understand every line of your code.

Also do ask questions, if you have any in the comments box… 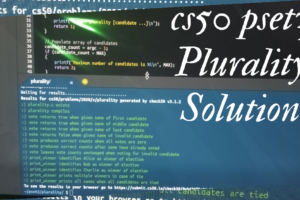 The week 2 problem set wasn’t hard as this week, where we